If you have rooftop solar panels or are thinking about obtaining them you should know that Orrville customers are permitted to carryover excess kWh's generated to off-set the following month's energy usage (other charges still apply). The customers bill is manually adjusted each month.  Customers will be required to purchase an upgraded meter at their cost, and have the system installed to meet county building codes.  Orrville Utilities is not required to offer financial credit (net metering) at this time.

If you are contemplating rooftop solar, click here for additonal consumer information you may find helpful.

The City of Orrville takes pride in its energy diversity. The following sources contribute to our community’s energy supply. Orrville also purchases power, when needed,  from the grid otherwise known as the energy wholesale market.

The City of Orrville is once again providing residents the opportunity to participate with other municipalities in a natural gas aggregation program, with Interstate Gas Supply, Inc. as the gas supplier. The twelvth natural gas aggregation program for Orrville will begin with the November 2022 billing period and end with the October 2024 billing period.  Please note this year the term of the program will be for 2 (two) years.  This year with the continued extreme market volatility and high fixed cost options, it was determined the best option was to select a monthly variable rate for the first 5 months of the contract and a fixed rate thereafter (as a public power community in the aggregation program we have contracted a slight discount on the variable rate). Starting with the November 2022 billing cycle, a new variable rate shall be calculated using the market rates, plus applicable taxes, fees and Dominion charges.  This monthly variable rate only lasts through March 2023.  In April 2023 a fixed rate will go into effect.  This fixed rate of $6.61 per MCF will go through October 2024

If you are not currently enrolled and would like to be included in the program, please call IGS at 1-877-353-0162 to obtain the eligibility requirements and enrollment procedures.

Finding ways to make your home more energy efficient is one of the best ways to save money on your energy bills—even with rising electricity rates. The following tips can help you get started on your pathway to saving energy:

By making your home as energy efficient as possible, you can save money and help preserve the environment!

Learn more about electricity generation and delivery with this helpful overview, courtesy of Orrville Utilities!

Electricity is unique in that it must be produced the instant it is needed. It just cannot be economically stored in large quantities using today's technology.

Utility companies schedule and operate a series of generators at a given power level known to be the most efficient for the season and time. As the customers' needs change, the operators must adjust the amount of electricity produced. If the required load is higher than what the generators are currently producing, the system's electrical frequency falls below the desired value of 60 cycles. The generation operators decide which unit is the most economical to increase power output, or they bring an additional generating unit online to raise the frequency back up to 60 cycles. If the generators are producing too much electricity compared to the required load, the system frequency increases above 60 cycles and generation operators decide which unit's power generation needs to be lowered.

In the event the electric utility doesn't generate the required power, the system voltage drops below the minimum set point, and circuit breakers trip to prevent equipment damage. This can cause major power outages for consumers. Fortunately, today's electric utilities have interchange agreements with other power suppliers that minimize the likelihood of this event.

Electric utilities also plan their power generation to meet widely varying demands. Because of the varied schedules on which customers use electricity, the load varies over the day, the week, and the year. Normally, the load tends to be lowest at night, when most people are asleep, and highest during the day, when the most appliances are in use. Some utilities see a peak at night due to electric space heating in the cooler months, while others see a peak during the hottest days of the summer when air conditioners are working their hardest.

A steam turbine power plant is the most common type of power plant today. This plant converts heat into electricity using a boiler and a turbine to drive an electric generator. Large-scale commercial systems use steam produced from a variety of sources, including nuclear reactions, fossil fuels, and even geothermal energy. The most common fuels used at steam turbine plants are coal, oil, and natural gas.

The steam, under great pressure, rushes through pipes and valves to turn the steam turbine at high speed, similar to how wind drives a windmill. Heat energy in the steam is converted to mechanical energy by the turbine.

When the steam leaves the turbine it goes to the condenser, where water is used to cool the steam back to water. The water is sent back to boiler to become steam again.

The force of the fluid causes the turbine to rotate, which in turn rotates the magnetic field inside the generator, producing electricity.

Coal has been the main source used to provide lower cost electric generation to the Orrville community for almost 100 years.

As of  January 2017, coal is now only be used about 10% of the time and the balance of  the power plant's generation  (25%) will be provided by the unit converted to natural gas.  Furthermore, Orrville has invested in a varied portfolio of generation including additional natural gas, wind, solar fields, and hydro projects (Energy Diversity).  Currently an estimated 16% of the energy provided to our customers will come from renewable energy sources

The City of Orrville takes pride in its energy diversity.  This minimizes our risk to price spikes in the market due to volatile fuel pricing and environmental regulations as well as positioning ourselves to being proactive towards newer, carbon friendly technologies.  In addition to Orrville's generation, Orrville may purchase power from the grid, otherwise known as the energy wholesale market, when needed.  Below, the pie charts depicts Orrville's energy sources for 2020 along with some historical information. When comparing the pie charts, you can easilty see how they illustrate the transition to renewable energy sources and the emergence of  a diversified portfolio, which supplies our community's energy. 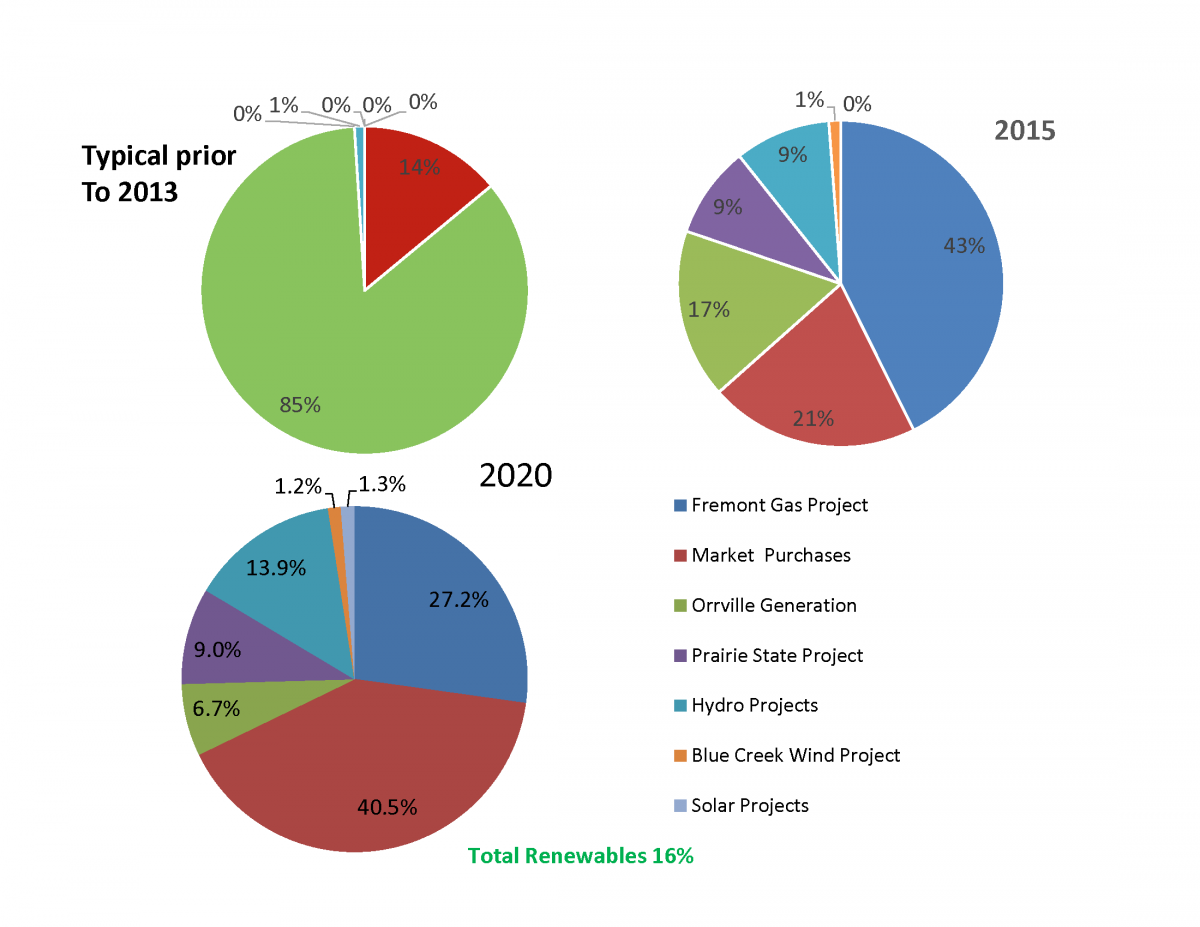 As electrical energy is generated, it is transformed and transported instantaneously through a network of wires, substations, and transformers. Electricity is generated at a comparatively low voltage at most generating stations. In order to transport this energy great distances, the voltage has to be increased, or stepped up to values as high as 765,000 volts.

This is accomplished through the use of large transformers located near the generation station, and provides an efficient and economical method of transmission. Transmission line voltages can range from 69,000 volts to 765,000 volts.

From the generating station to the final destination, the generated energy undergoes numerous changes in voltage and direction. Each change requires expert design and handling to provide the consumer with affordable electric rates and a reliable energy supply.

The distribution system delivers electricity to each customer's residence, business, or industrial plant. It is primarily

composed of the distribution substation and distribution feeders, but also contains reclosers, sectionalizers, fuses and capacitors.

Electricity is "stepped down" from a high to low voltage by transformers located at the distribution substation—the reverse of what happens at the generating station. Electricity enters the larger primary side coil and leaves from the smaller secondary coil. The electricity is reduced to a lower distribution level voltage—usually less than 39,000 volts—and delivered via three phase lines.

The distribution line supplies the final “step down” transformer at the customer’s location, where the voltage is lowered to the service level for the customer's electrical system.

Electric power leaves the distribution substation with voltage ranging between 4,000 and 36,000 volts. This is still, of course, too high for most homes and business uses, so a distribution transformer is used to further reduce the voltage.

Businesses and industrial plants generally do not share transformers with other customers and require larger transformers, depending on the type and amount of electrical equipment used at the facility.

Large power users—such as heavy manufacturing companies—frequently use service voltages higher than 240 volts to reduce their electric rates. Most industrial facilities utilize 480 volts, but some may require primary line voltages due to very large motors or high energy processing needs.

The National Electrical Code specifies installation requirements on service-drop conductors in terms of wire size and minimum clearances above the ground.

The service entrance, as the name implies, is where the wires connected to the load side of the meter enter the house or building. The service entrance in a residence is commonly referred to as a breaker or fuse box. In more complicated commercial or industrial electrical systems, the service entrance may be a main disconnect panel or a trough where up to six main switches are present.

Energy Assessment for Your Home

Orrville Utilities is pleased to provide the following links to help assess your home's annual energy use and provide recommendations on increasing efficiency, tailored to your needs. Just click on the title to access the link,  Energy Star's Home Energy Yardstick and the Department of Energy's Home Energy Saver Tool.